The first time I spoke to Kenneth Roy, interestingly the topic of conversation was Cancer. I was an attendee at the Young Programme, held in the beautiful Piersland House Hotel in Troon. After I had checked into my room and collected the itinerary I was filled with an immediate sense of regret. I decided I should have stayed home; residential courses were not for me, never mind how plush the environment was.

As an icebreaker, that detestable opening event held in conferences and training programmes across the land when every interesting thing about yourself evaporates as your reach out into your mind grasping blindly for any small tidbit to let a room full of strangers know anything about you that they might find interesting we had to discuss an object of value. Time has relieved me of my exact place in the running order, but all I can really remember is that I was somewhere towards the end, maybe three quarters of the way through the list of delegates.

When it was your turn you would walk to the front of the seemingly never ending hall and take your seat beside Kenneth. I watched in horror as delegate after delegate took to the seat with ease and Kenneth, in his inimitable way, would interview these people about exactly what these objects meant to the people holding them.

I remember there being some tender moments, I remember people having tickets to events shared with loved ones, sporting memoribilia, sporting equipment even, and Kenneth managed to generate a good humoured rapport with people, coaxing exactly what these objects meant to people out of them with ease. I remember the room being filled with laughter as the darkness pulled close outside, the room which seemed uncomfortably large grew more intimate, we were leaning in, completely at ease and in awe of watching someone who was a natural interviewer, who had perfected his craft over years of work unknown to the masses in the hall.

Finally it was my turn, and as I made the grudging walk down to Kenneth what I remember most is thinking the word ‘inscrutable’. I did not feel at ease anymore, instead I felt uneasy. I felt like the carefully laid plans of my preparation for this Programme were falling down around my ears. I had an uncanny sense that if I was anything less than truthful, Kenneth would see right through me, and he would press until the fragile veneer I was wearing shattered.

I had made a rather Machiavellian selection for my object of value. It lay tucked away inside my wallet, scrunched up behind my bank cards. It was the hospital bracelet I had been wearing when I was discharged from hospital, after 8 months of intensive Chemotherapy for the treatment of my leukaemia.

I had many reasons for picking that bracelet. I wanted people to know, to treat me with kid gloves, because in many ways there were parts of me that were still damaged, still hurt from the trauma that surviving had inflicted on me.

I realised when the word ‘inscrutable’ flashed in my mind that Kenneth was the kind of person who didn’t wear kid gloves, with Kenneth, the gloves were off.

I started with a joke, telling the rapt audience that things were about to go downhill quickly. I think at one point I mimicked a rollercoaster with my hand. As the interview progressed however I quickly realised I had misjudged the situation, something I was quick to do in those days due to a heightened sense of self preservation. Kenneth didn’t keep his gloves off because he expected an intellectual fist fight, although he was undoubtedly always ready for one, he had taken his metaphorical gloves off so he could treat everyone he came into contact with delicately. So he could unpick their stories with care. I felt quickly at ease in his care, and attending the programme with him and the other members of his excellent team; Fiona, Islay and Barbara quickly became one of the most transformative experiences in my post cancer life.

What developed from there was a friendship which has changed and influenced me for the better, and the ripples Kenneth has left behind in my life continue to reverberate still to this day.

Sometimes the ripples grow into a huge confluence, and the gravitational waves he left behind in contemporary Scottish life afford you a Monday with an empty schedule, and an excitingly early morning delivery of “In Case of Any News, A Diary of Living and Dying” and as the wind howls outside you can spend a few hours on the couch with the last words of a friend.

That’s exactly what Kenneth’s memoir of his last weeks in hospital is. It strikes like a lightning bolt, full of wit and prose which is at times devastating in its humility, and at others had me laughing aloud on the couch. A proper lol, not one typed hurriedly into a text message.

“My natural expression was a serious one, however hard I tried to lighten up. Sometimes strangers would be sufficiently concerned to enquire about my welfare.”

Full of praise for the NHS, the diary becomes part memoir, part explorers log as he documents the daily comings and goings of the ward with the distinctive voice he was so well known for. Physically unable to travel the country he knew so well, he turns this explorer’s mind inward, exploring events from his past, and his surroundings and present circumstances with a searing intensity befitting the man.

He captures the late night futility of hospital life perfectly, and I felt at times I was sitting in the room with him, watching the hands tick on the clock as they drew towards morning.

Kenneth even touches on what I had dubbed his ‘Inscrutability’, mentioning that he was known as ‘Gloomy Joe’ as a child, and that “My natural expression was a serious one, however hard I tried to lighten up. Sometimes strangers would be sufficiently concerned to enquire about my welfare.”. In truth I never found him to be gloomy, but instead always in good humour and laughs around the dinner table were plentiful whenever I was in his company.

As the pages turned, ever quickly as they are want to do when you are in such talented hands, I suddenly became acutely aware, as Kenneth was, that it was nearing time to say goodbye.

After putting the book down I spent a few moments lost in thought with my cup of tea. There was no Kenneth left, nothing more for him to share with the world. There would be no forgotten manuscript found at the bottom of a filing cabinet, no secret novel he had penned under a nom de plume. He gave everything he had to us, even as the end drew close.

Later the realisation gripped me. There may be no more Kenneth, and the world is poorer for it, we have a generation of Young People who attended his beloved Young Programmes, whose lives have been enriched for it. He really did create a new Inveramsy through that.

When I take my seat on the last bus and am too heading for the terminus, I hope I reach into my bag and find some Saint Agur and crackers for the trip. 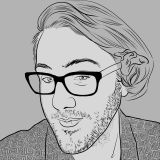